Below is the gift of the Buddha Batik from Luang Por Viradhammo to the Ottawa Buddhist Society.  This beautiful batik of the Buddha was created and presented to Luang Por Viradhammo in 2003 by a Polish couple, Bzyszek and Goska Molski. LP Viradhammo in turn gave the batik to the Ottawa Buddhist Society (OBS). It hangs at the Quaker House for our Friday evening meditations, dhamma talks and during retreats. A section of this iconic wall hanging forms the central image of the home page of this OBS website developed by Marco Fraschetti. The clarity and colours of the original Polish batik were artistically captured in a photograph by Adrienne Herron, who then donated the photo to the OBS. 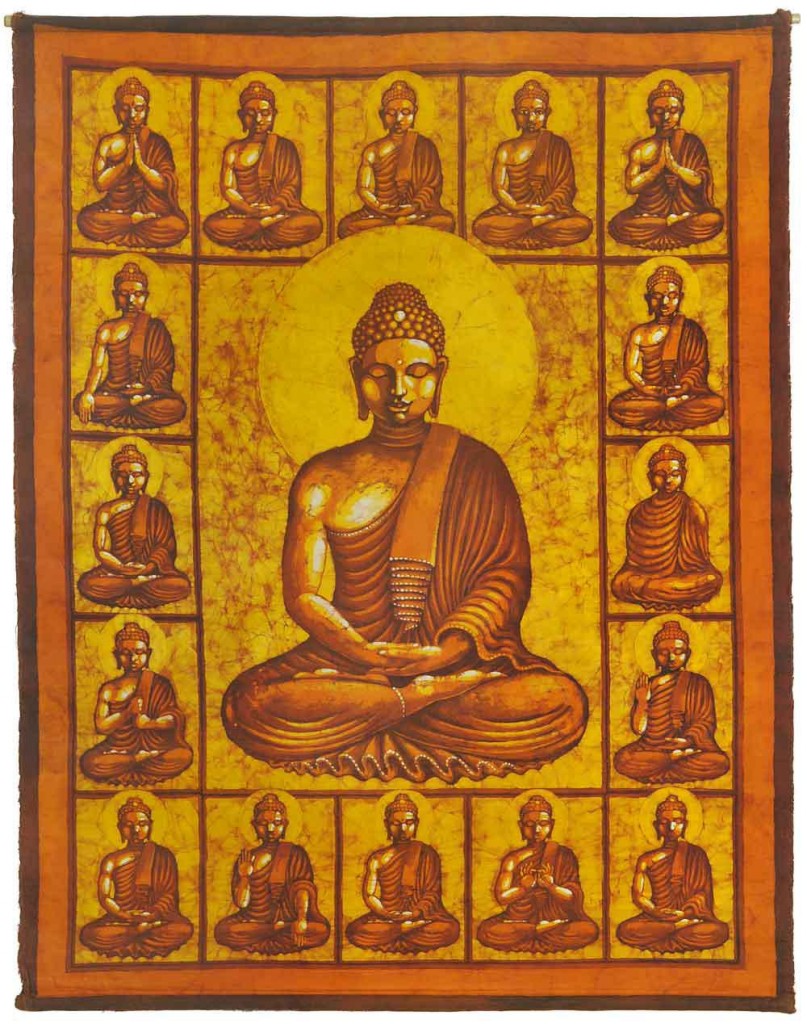 Buddha batik photo donated to the OBS by Adrienne Herron,

The meaning of the three mudras (or symbolic hand gestures) which the OBS web design team chose for the website are as follows:

1). Dhyana Mudra (Gesture of Meditation)
The central Buddha shows the mudra of palms facing upward with hands in the lap. This mudra represents the practice of meditation as the kernel, the gateway, and the commitment to fulfilling our highest spiritual potential. This gesture symbolizes the overcoming of the world of appearances through the Awakened mind.

2). Bhumisparsha Mudra (Gesture of Calling the Earth to Witness)
The image at the top left depicts the Buddha touching the earth with his right hand. This mudra symbolizes the Buddha’s victory over the Tempter Mara (who represents the seductive passions that entrap and delude us) as the result of practicing unshakeable awareness in the present moment. The Buddha is said to have made this gesture at the moment of his Enlightenment.

3). Bodhyangi Mudra (Gesture of Supreme Wisdom)
The image at the bottom left shows the Buddha grasping his right index finger in the fist of his left hand. There are many interpretations for this mudra. It stands for the unity of the five worldly elements (earth, water, fire, air, and metal) with spiritual consciousness. Also called the Mudra of the Fist of Wisdom, it stresses the importance of spiritual wisdom.

The full recording of Ayya Medhanandi’s personal reflections on the Buddha batik mudras was captured by Andre Vellino at the Quaker House on April 4, 2009. All these gifts of dhamma point to the rich spiritual heritage of the OBS. See this link to Ayya Medhanandi – Buddha mudras on the right sidebar.