Members and friends of the OBS are grateful for the dhamma reflections and meditation guidance given freely by our spiritual mentors. Their dedication in following the instructions and example of the Buddha and the Theravada vinaya, has enabled the teaching to survive in the world in their original form for over 2500 years. One of the main objectives of the OBS is to provide opportunities and support to the sangha and the lay community who carry forward the practice through their actions.

Bhante Gunaratana is a bhikkhu (mendicant monk) of the Theravada (School of Elders) tradition of Buddhism. He was born in Sri Lanka, ordained in 1940, and received a classical Buddhist education. He spent five years working with the Harijans (Children of God – Gandhi’s term for the “Untouchables”) in India on behalf of the Maha Bodhi Society. He then worked ten years as a missionary, teacher, and administrator in Malaysia.

Bhante Gunaratana was invited to the United States in 1968 to teach Buddhism and lead meditation retreats. He earned a Ph.D. in Philosophy from the American University and has lectured at many universities in North America, Europe, Australia, and Southeast Asia. He is the author of several books including the popular Mindfulness in Plain English (1994) and Eight Mindful Steps to Happiness: Walking the Buddha’s Path (2001).

Bhante Gunaratana is now the abbot of the Bhavana Society monastery and retreat centre in the Shenandoah Valley of West Virginia, about 100 miles west of Washington, DC. He continues to teach and conduct meditation retreats worldwide. http://www.bhavanasociety.org

Ajahn Viradhammo was born in Germany, 1947, to Latvian refugee parents. They moved to Toronto when he was four years old. Around 1969, while living in India, he encountered Buddhism, meeting the late Samanera Bodhesako, who introduced him to the teachings of the Buddha. He eventually travelled to Thailand to become a novice at Wat Mahathat in 1973 and took bhikkhu ordination the following year at Wat Pah Pong with Ven. Ajahn Chah. He was one of the first residents at Wat Pah Nanachat, the international monastery in north-east Thailand.

Having spent four years in Thailand, he went back to Canada to visit his family in 1977. Instead of returning to Thailand, he was asked by Ajahn Chah to join Ajahn Sumedho at the Hampstead Vihara in London. Later, he was involved in the establishment of both the Chithurst and Harnham monasteries in the UK. In 1985, invited by the Wellington Theravada Buddhist Association, he moved to New Zealand, accompanied by Venerable Thanavaro, where he lived for 10 years, setting up Bodhinyanarama monastery.

In 1995 he came to the UK to assist Ajahn Sumedho at Amaravati and stayed for four years before returning to New Zealand, where he lived until 2002.

Ajahn Virahadhammo is the senior abbot of Tisarana monastery, located in Perth, Ontario, which he founded in 2005. He has been the principal spiritual guide for the Ottawa Buddhist Society for the past 10 years. http://tisarana.ca

Bhante Rahula was born in 1948 in Southern California. He grew up in the hippie revolution and entered the US Army for three years in 1967, spending ten months in Vietnam. Adopting the lifestyle of a wandering hippie, he began a long odyssey starting in Scandinavia which took him half way around the world to India and Nepal. He encountered his first spiritual teachers, Tibetan Lamas, in Nepal at a month-long meditation course. He was more or less converted to being a Buddhist or at least an earnest seeker after Truth by the end of the course. His search brought him south to Sri Lanka where he ordained as a Buddhist monk in 1975 and subsequently received full ordination in Los Angeles in 1979. He remained in Sri Lanka off and on until 1986 whereafter he returned to the United States.

Bhante Rahula tells his tale of spiritual awakening in a candid autobiography entitled One Night’s Shelter: From Home to Homelessness. He has also compiled The Way to Peace and Happiness, an anthology of fundamental Dhamma writings translated from the Pali Canon with his helpful introductions and commentaries.  He has been living at the Bhavana Society, a forest monastery/meditation centre, in West Virginia since it opened in 1988. He conducts retreats integrating vipassana meditation with Yogic breathing and exercises primarily in the United States and Germany. The Buddha told his monks to go forth into homelessness and Bhante Rahula’s footloose journey continues to this day. He spent several months of 2000 in India working with the Harijans. He subsequently undertook a four month trek in the Himalayan Mountains. http://www.bhavanasociety.org

Born in 1954, Ajahn Sona’s background as a layperson is in classical guitar performance (U. of Toronto). He left behind the worldly life and embarked on a five year spiritual journey as a lay hermit. He ordained as a Theravada monk at Bhavana Society monastery in West Virginia and further trained for three years at monasteries such as Wat Pah Nanachat and Wat Keuhn in Northeast Thailand.

Ajahn Sona is a pioneer in introducing the Theravadin forest monastic tradition to Canada. He established the Birken Forest Monastery north of Vancouver upon his return to British Columbia in 1994. He is well experienced in leading meditation retreats and his teachings on Buddhist practice combine tried-and-true Buddhist wisdom with modern common sense. Ajahn Sona is the abbot of Birken Forest Monastery at its new and expanded location near Kamloops, BC. 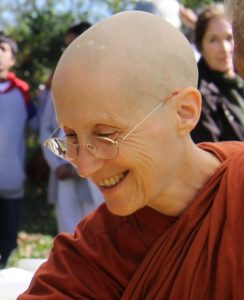