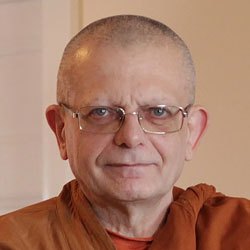 Ajahn Punnadhammo is the resident bhikku at Arrow River Forest Hermitage, a Theravadin Buddhist monastery and meditation centre located fifty miles southwest of Thunder Bay. Venerable Punnadhammo has been studying and practising Buddhism since 1979. He began studying the dhamma under Kema Ananda, the founder and first teacher at the Arrow River Centre, and did a one-year solitary retreat at the Centre in 1988.

After this he went to Thailand and was ordained in the forest tradition of Ajahn Chah in 1990. Between 1990 and 1995 he was based at Wat Pah Nanachat, Thailand, and in 1995 was asked by Kema Ananda to return to Canada to assume the management of the Arrow River. He has been there ever since. Venerable Punnadhammo is Canadian, born in Toronto in 1955.